it was such a dreary and cool morning on saturday that i decided to make the semolina bread for this weeks twd challenge.  after the scorching hot weather of june and early july, it was nice to have a break from the heat-now if we could just do something about the rain...

the tuesdays with dorie festivities this week are being hosted by renee of the way to my family's heart and anna of keep it luce.  be sure to click on those links to see what everybody has baked-there are over 100 of us participating.

semolina bread is a favorite of mine.  something about the color, the golden hue of the bread...the simplicity of the recipe-a definite plus for me.  this recipe is in nick malgieri's book, "how to bake" as well as baking with julia and i have made it before.  the two recipes are almost identical-the only real difference is how much flour is added to the sponge with the total amount called in the recipe for being the same.  the chatter over on twd was that it was salty-i did cut it back to 1 1/2 teaspoons after reading several comments on the amount being too much.  however, i think that between cutting the salt and the high humidity of the day, my bread was in a hurry even though i wasn't! 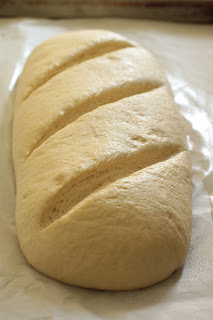 i didn't quite understand the description for the slashes so i just did 3 on the diagonal with a serrated knife. 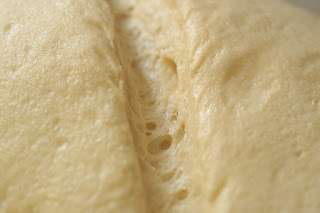 a close up of the slash.  there is a fine line between too deep and not deep enough.  either way, you need a sharp knife or you run the risk of deflating the bread. 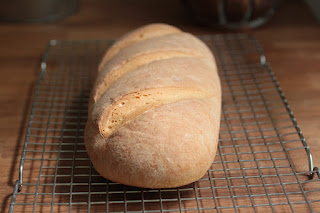 the finished loaf.  it took at least 15 minutes longer in my oven (i keep a thermometer in it to monitor the temp for accuracy)  to get the internal temp to 207 degrees, i gave up on getting it to 210. 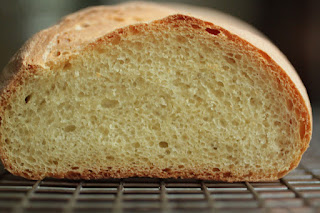 the interior of the loaf-i think i done good this time!  the crust was nice and chewy and like a real artisan bread crust!  we are having the rest with blt's since it is tomato season... 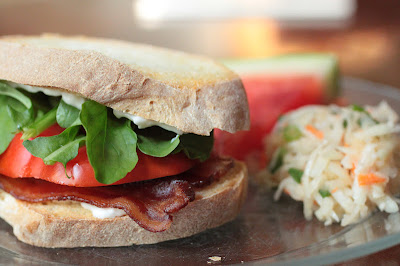 tomatoes and arugula from the garden, uncured-dry rub bacon from trader joe's and homemade bread.
droolworthy, isn't it...
Posted by jane of many trades at 2:30 AM 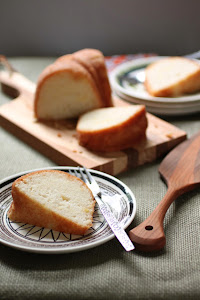